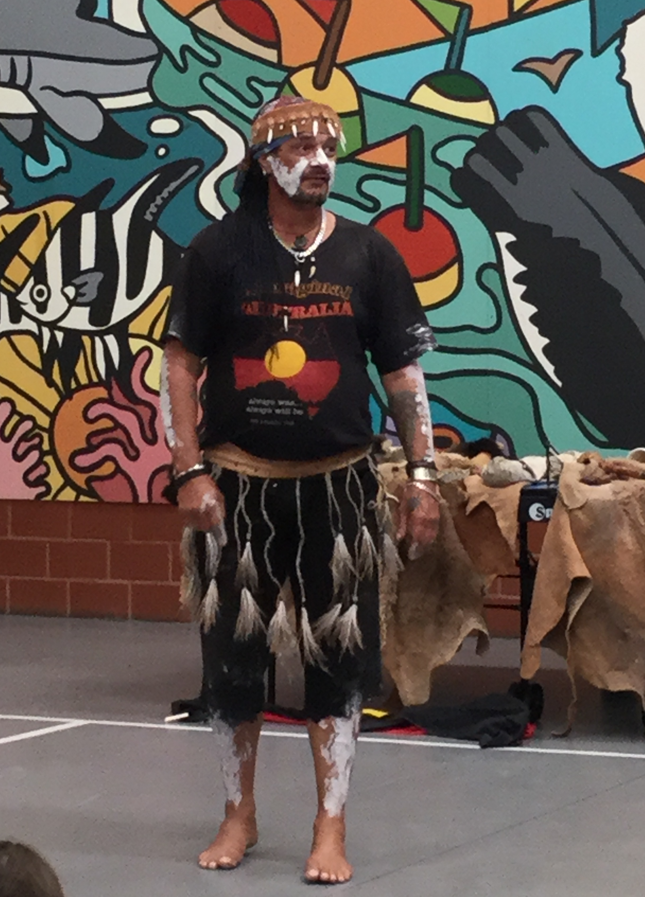 On Friday the 5th of November 2021, we had an incursion at our school. The whole school went to the undercover area and sat down. While we were getting organised he started throwing rabbit fur covered balls around the audience. We all had to try to catch them but most of us missed out but it was still fun.

As soon as we settled he introduced himself to the whole school as Wadjiny. Wadjiny is an Aboriginal word for turtle and he comes from Queensland and his role was to teach us some things about the Aboriginal culture.

He told us lots of stories and he put on special music and showed us dances representing Australian animals. We were encouraged to get up and join him doing the dances.

Next, Wadjiny started to tell stories about how Aboriginal people used their weapons and the food that they ate a long time ago. The weapons he showed us were some spears and different types of boomerangs. He also showed us the different weapons they used to hunt different animals.

Then we had some more dances and the teachers all had to get up and dance with the girls. It was a dance to collect food. All the time he was teaching us new Aboriginal words.

Lastly he showed us how to make a controlled fire. He bought out different types of sticks and some flammable bark and dried grass. Then he rubbed the two sticks together really fast to create a fire. It started to smoke then burst into flames.

At the end people kept asking questions. A few of us helped him pack up and we got to put some white rock paint on our faces.

Overall, I think this incursion was great and exciting. We enjoyed every activity that we did and we hope we have more incursions like this one.