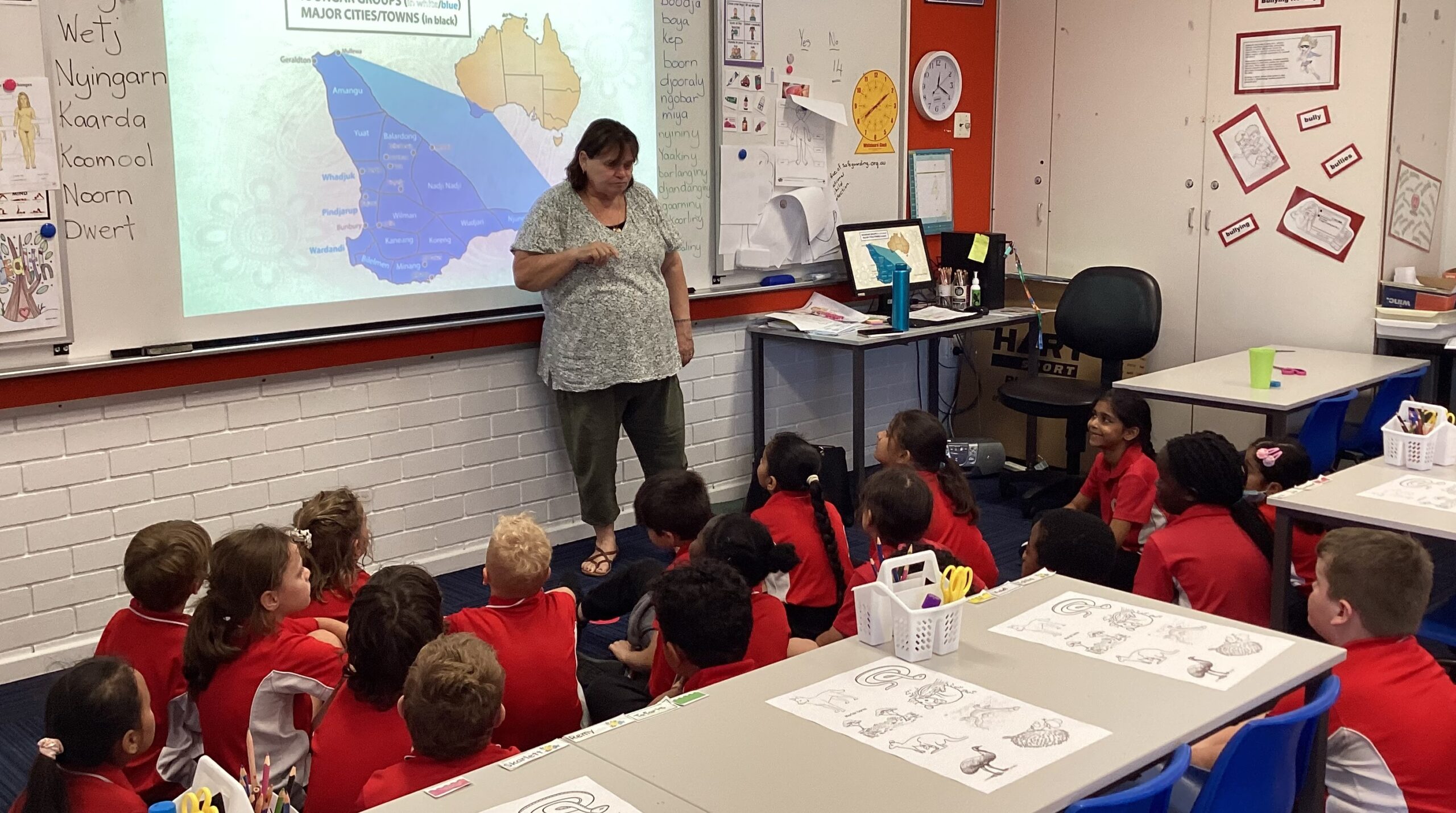 On 23 November we welcomed Sharon Gregory, Noongar Language Specialist who ran workshops with our classes.  Sharon discussed the Noongar Nation and the languages used.  She taught us some simple songs in Noongar and the names of birds and animals.  We each made a book with pictures and Noongar names of the animals.  Sharon helped us write an “Acknowledgement to Country” for us to use around our school and at special events like assemblies.  Sharon also supplied our library with 10 Noongar Dictionary’s for staff and student use.  Thank you Sharon for your knowledge, we all learned a lot and are keen to learn more.  Thank you to Mrs Julie Waigana and Mrs Janine Griffiths for assisting with these sessions. 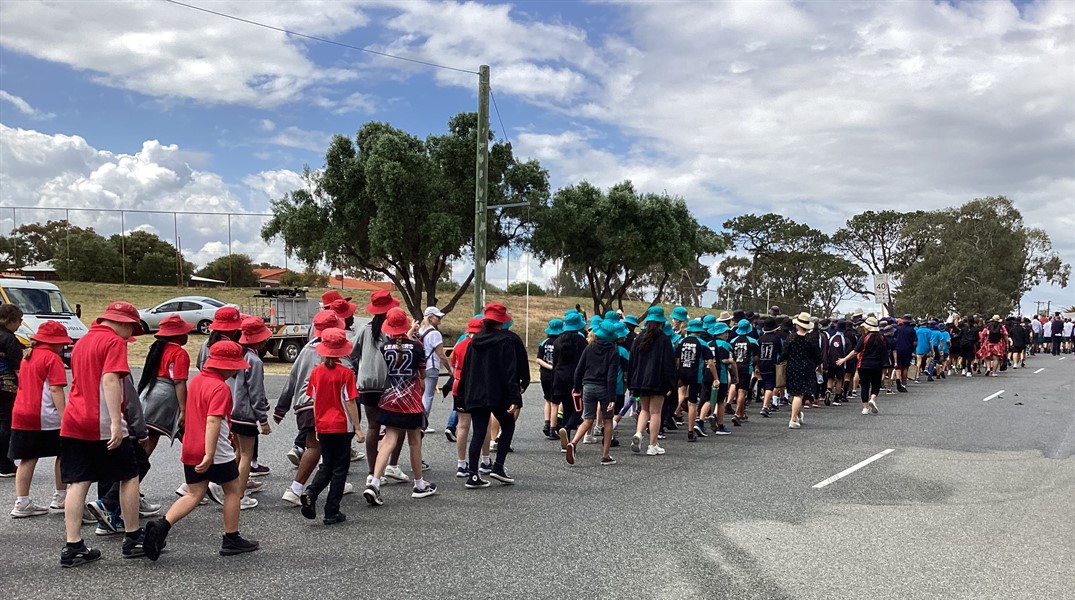 On Wednesday, 9th November, 1250 students from 27 schools across the Fremantle and Cockburn districts, participated in the annual RSL Youth Parade. The ceremony commemorated the 104th anniversary of the signing of the Armistice on the 11th November, 1918, putting an end to World War 1.

Our Year 4, 5 & 6 students from Room 14, represented Spearwood Primary School, marching from the Cockburn Council Chambers to the RSL Memorial Park on Spearwood Avenue. The students’ behaviour was exemplary, and our school leaders Hesha and Ezeckiel demonstrated their exceptional leadership skills by laying a wreath on the memorial, following protocols to the letter. It was a moving and thought provoking service, one that sets our students up to be leaders of the future. We are very lucky to be a part of such an event. Thank you to the City of Cockburn and RSL for the opportunity to attend. 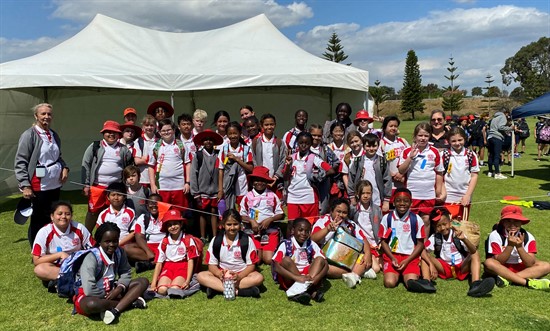 On the 25th and 27th October some students represented Spearwood Primary School at the Interschool Carnival. Thanks to Mr Walsh from Phoenix Primary School for organising the carnival. The overall winner of the carnival was Newton Primary.  Spearwood Primary won the Meritorious Shield by 1 point. This is a handicap points system, due to the schools all having different enrolment numbers.  Thank you to our fantastic P & C for our marquee and uniforms – Spearwood are always the envy of the other schools!!  Our team looks great and our students’ behaviour is
impeccable Congratulations to Peter for winning Champion Boy, Hepa being Runner-Up and Kaliyah winning Intermediate Champion Girl. All the students came home with a haul of ribbons. 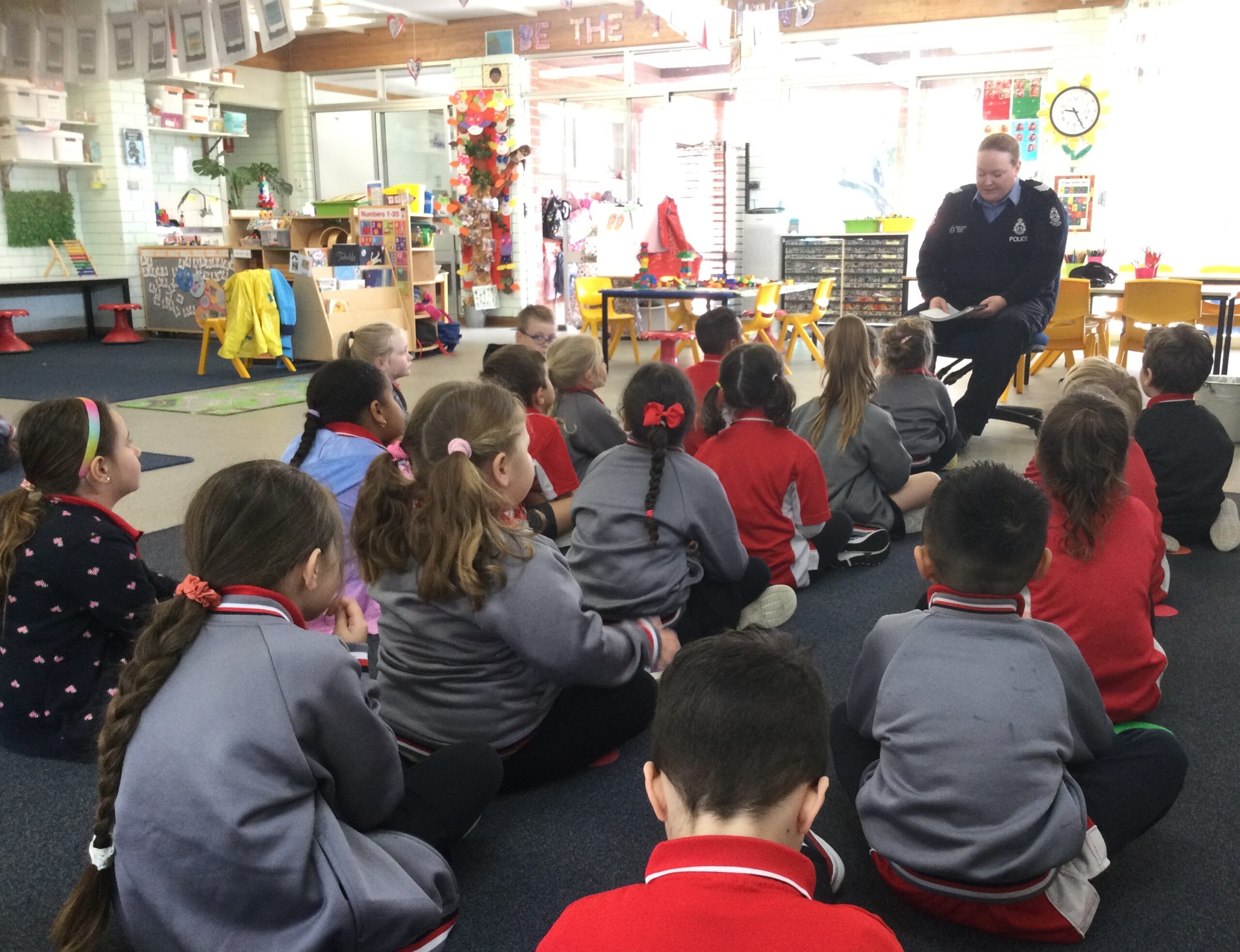 EC2 have been learning about roles in our community and the places where these jobs take place.  This Term, Mrs Gavranich and Ms Riches organised a visitor from the Western Australia Police Force.  We were lucky to have the Fremantle Community and Youth Engagement Sergeant, Andrea Fraser, come to visit.  We got to ask questions and learn about the role of the police in our community. 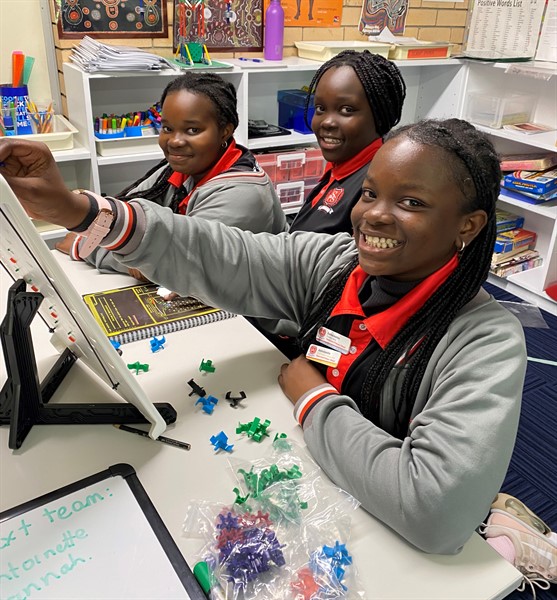 There was a wide variety of hands on activities set up around the senior area and students worked in pairs to explore, design, experiment or create.  The morning was great fun, with lots of hands on learning achieved.

They had a City, Engineering and design area where students had to create a city, complete with bridges and towers.  They also had access to K’Nex where students followed instructions to design a balance scale.   The Forensic Finger Printing Lab gave them an opportunity at doing their own finger prints and comparing them to others with the use of a magnifying glass.

In the Computer Lab there were microscopes giving the students the opportunity to explore a wide variety of micro views of our natural world.  A  huge set of Marble Maze pieces were placed on the floor where they had to design a long downward run for a marble.  There was a Tumble game where students needed to work out how to get some tiny balls down a near vertical board using a series of well-placed levers.  A very challenging activity was the tower building using playing cards.

Students had a paper tearing competition to see who could make the longest strip from a piece of paper.  The final activity involved using symmetry to draw the other half of their faces from a half photo.  Some student just estimated while others used rulers to get the exact measurements. 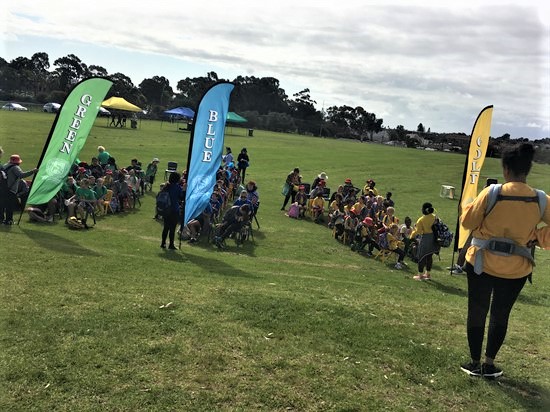 Weather threatened the first day of our carnival on Tuesday 13 September, so the Long Jumps were held on the Monday and the 800 metre race was held on Wednesday.  The 800 metre race was held on Wednesday.  All other events were held on Thursday.  There was a little bit of wet weather which held up one event, but our children stayed dry in shelters in the bays.  Our staff and P&C volunteers worked hard all day in many roles. 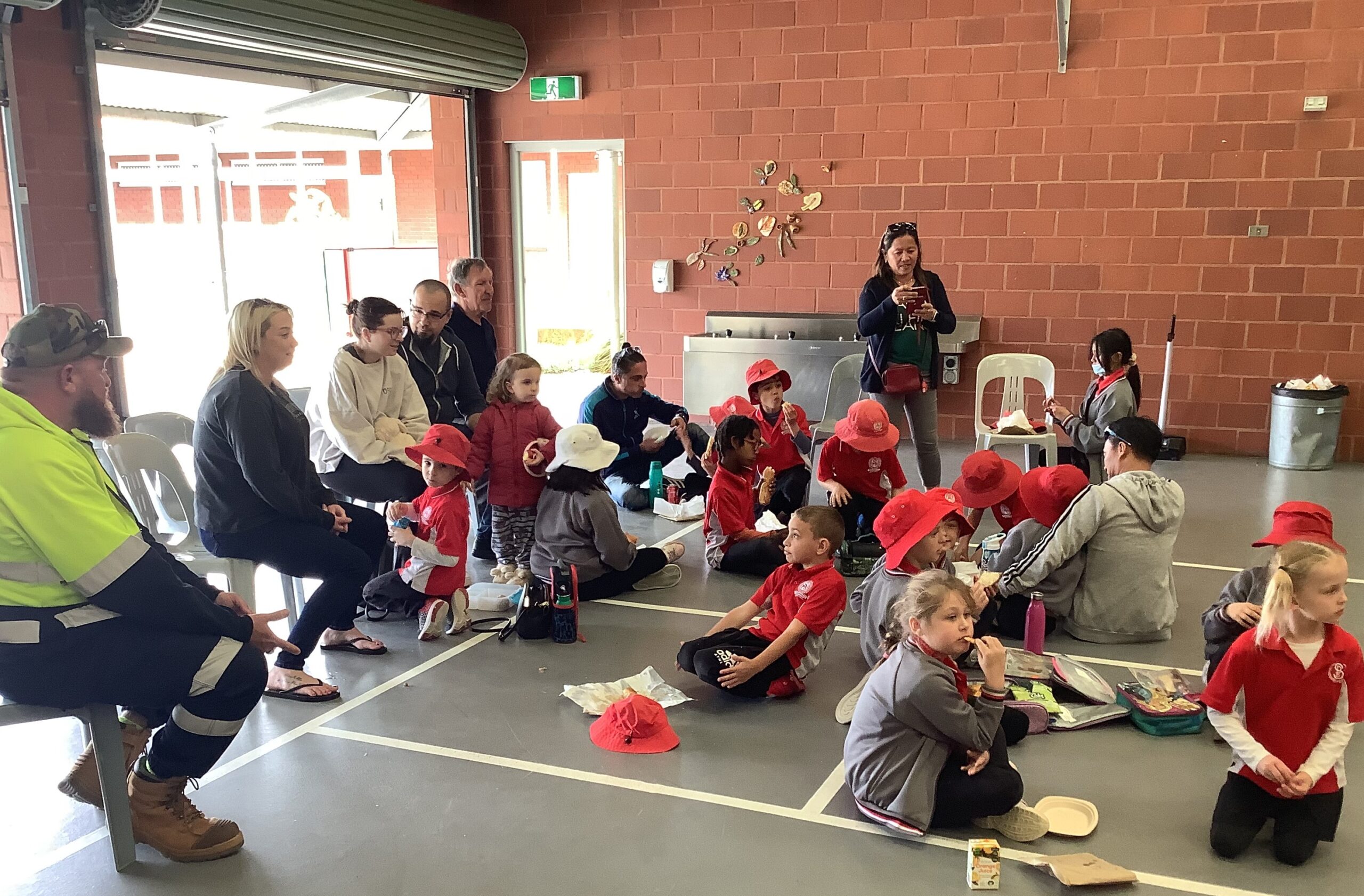 Our Father’s Day Lunch and extended play was held on Friday 2 September.  Father’s, grandfather’s, uncles and other father figures enjoyed a lunch with their children followed by lots of fun with a variety of activities. On Friday 26 August, Spearwood Primary School finished off Book Week with a spectacular Book Character Parade.  This year’s theme was “Dreaming with your eyes open” which inspired the staff to dress as the characters from Peter Pan and Wendy by J.M. Barrie.  Thank you to all the parents who assisted in the making and assembling of costumes.  It was great to see so many students who used everyday clothes and items from their home to create a costume, proving that you don’t need to spend money to have some Book Week fun!  Congratulations to all our winners.

Thank you to the fantastic P & C parents who worked long and cold hours on the Sausage Sizzle at Bunnings, which was held on Saturday 27 August.  This was a great success with many sausages sold and a profit of $1,620!!  This particular event is aiming towards our goal of an outdoor classroom area. 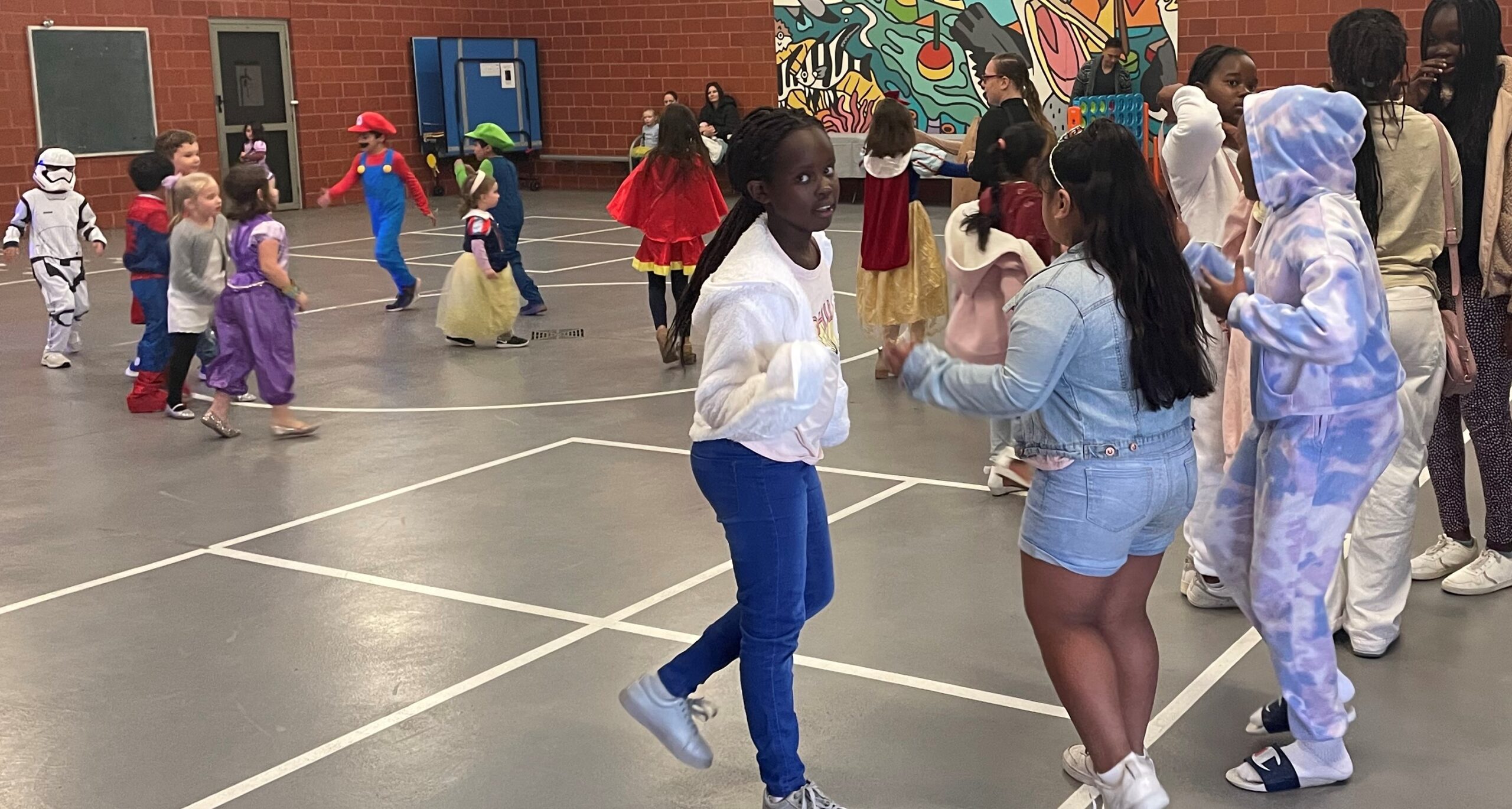 Friday 5th August was the P & C Disco.  Our theme was ‘S’ and there were some amazing and creative costumes.  The school thanks the P & C for holding such a fun event. The students looked great and had a fantastic time.  The costume winners were:  Sian – the Sailor, Amelia – The Spud, Willow – the Swan, Che – Sponge Bob and Rory – Carlton’s Adam Saad.

We know a lot of hard work goes into the planning, buying items, decorating, cooking and all elements.  Thank you all to those P & C workers.  Thank you also to the staff and extra Volunteers:  Mrs Jackie Freckelton, Ms Carol Derbyshire,  Ms Samantha Carbon and Mr Garth Caesar.